Multitasking is a Lie

At the end of the day, a lot of business leaders find themselves asking the question:

Where did that time go?

Even when you have a list, written out clearly, with all the tasks you need to complete in the day, somehow you end up with a list of incomplete activities and don’t know how you got there.

You come in the next morning and wonder how you’re going to get through it all. Then your team member asks you for a minute. After that, you’ve got a few emails coming in that need answering. The question is, are you trying to multitask because you think it will help you to be more efficient?

I was sitting down with one of my clients recently and we were going through a job description for an Admin Manager. I noticed that he mentioned multitasking as an important attribute. This isn’t uncommon when writing job descriptions, a lot of business leaders will expect their team members, as well as themselves, to be great at multitasking at any given time. Especially when there are multiple high priorities, competing tasks in the role.

It’s possible that while you’re reading this, you’re might be keeping an eye on your emails or speaking to some of your team members. We are conditioned into thinking that multitasking is the way to be more efficient and more effective. It’s a way to achieve a lot more in a given amount of time, right?

Multitasking is a Lie

Wrong! Multitasking is a lie. It’s just an opportunity to screw up more than one thing at once. That sentiment doesn’t come from me alone, it was Steve Uzzell that said it and I completely agree with the concept – it’s just a way to be less efficient. 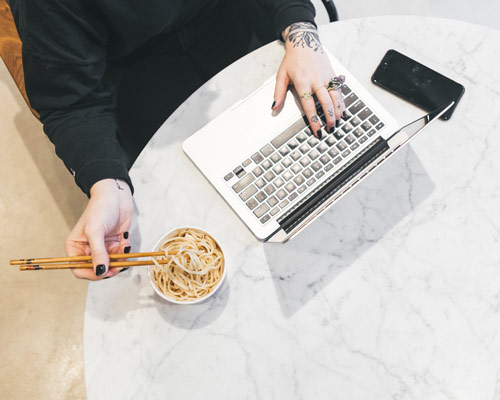 Not Meant for Human Beings

Multitasking was originally not a concept that was meant to describe human behaviour. In the 1920s, psychologists were studying human behaviour and their capability to carry out more than one task at a given time. However, the word ‘multitasking’ actually came on the scene around the 1960s. That was the time when 10 MHz computer speed was absolutely mind-boggling and the word was devised not for us but these new super-computers.

The literal meaning of that concept was multiple tasks alternately being processed by one resource and that resource was the CPU. Then the context flipped, it all changed and multitasking started being used for us. The definition remained the same, for multiple tasks being completed simultaneously by one resource but this time it was a person rather than a CPU.

Human brains CAN do multiple things at the same time

Now what you need to understand and internalise is our human brains are capable of doing multiple things at once – we can walk and we can chew gum, we can watch TV and iron our clothes etc. But our brains are not designed to focus on more than one thing. It has to switch back and forth to pay attention. Many of the behaviours that we carry out simultaneously don’t require a lot of active attention, for example breathing at the same time as you reply to a text from your friend. We don’t need to stop and think about one before we do the other.

The effect of multitasking on business

What is the implication of this way of working for effectiveness in our day-to-day business life?

Think about it like this – you arrive at your office and you decide that task A is the most important thing for the day. So you start, you focus on that task and around 30 minutes later you finish it. This is the focused approach – no interruptions, no distractions. You just focus on one thing and you get it done.

Now, think of a very distracted scenario – you start task A and you get about a quarter of the way through. All of sudden there’s a distraction; somebody knocks on your door and asks for a quick catch-up about something. Now your mind has to switch, to reorient for that distraction, then you spend some time on that distraction. Once that is done, your brain has to again switch and reorient for task A, then maybe after another hour or so you finally complete the task.

What should have taken you 30 minutes, has taken you more than an hour. What researchers have found is that, in this unfocused approach, the extra time spent on a task genuinely increases by 25% for simpler tasks and more complex tasks can sometimes increase exponentially.

So ask yourself, should you multitask?

If the answer is no, then you need to go back and ask yourself if you are trying to multitask because you think that’s the way to be more efficient. It doesn’t help you become efficient, it is a way to inefficiency.

Alternatively, if it is delegation of tasks that is holding you back, meaning that you need to spend extra time on multiple tasks, read more about delegation here. Learning how to delegate effectively can save you so much time and help your team to feel more involved.

Please feel free to get in touch if you would like to discuss this or any other issue that you are facing in your business right now. I would love to hear from you.