Are You Putting Too Much Pressure On Your Team?

How much is too much?

A client asked me this question in a session recently, concerning a job description he was writing for a key role in his business.

To help answer this, I want to share with you a very important approach, called the phased approach, to take care of this dilemma, based on a brilliant but simple framework.

The concern that my client had was, if you were to give little, then there is a precedent that gets set. There is a standard that gets set, and then anytime extra work is given, or extra responsibility is given, the person feels it’s too much to do. You might be familiar with this!

On the other hand, if you give too much to a person when they’re starting in a role, it could result in overwhelm. And more importantly, for me, you’re unknowingly setting the habit of non-performance. That’s not a good habit or a precedent to set in this case.

To ensure that you are helping your team member to achieve their peak performance, you need to chunk it down into three parts. The number of parts is up to you but three always works well.

In the graph below, you will see that pressure can work well for performance, up until a point. That point is determined by whether it is channelled in the right manner. As the business leader, when you are having meetings and discussions with your team members, when you’re setting targets for them, you are increasing that conscious pressure and focus. As a result, performance increases. 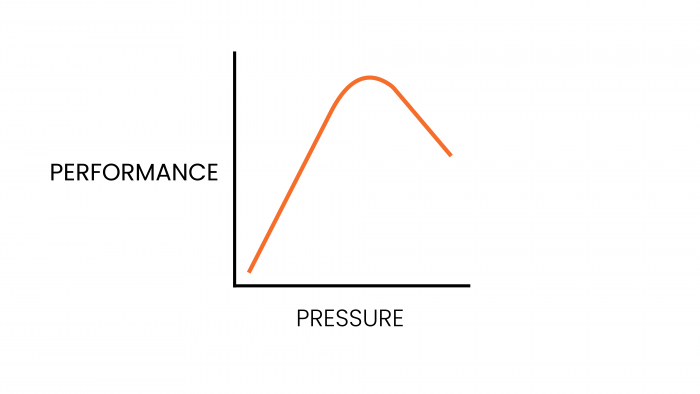 As you can see, there is an optimal state. After a point, the performance drops due to a feeling of fatigue. Keep in mind that this is completely natural, using this framework can help to introduce pressure more gradually and avoid that tipping point.

There are several reasons why a team member may be failing to maintain their potential. I have addressed the major ones in a recent article on the 5 dysfunctions of a team.

The three-phase approach begins with defining what the non-negotiable aspects of their role are.

What are the core deliverables that absolutely must be met for the role?

Once defined, that’s phase 1. You should introduce the person to the concept of introducing their role in phases and with this set, you can now leave them to get to grips with things. Ensure that they are performing and enjoying the role.

This phase should be as condensed as possible, taking into consideration what’s realistic. They are trained, fully inducted into the business and understand their role fully by this stage.

As soon as that’s done, the person can be introduced to phase 2. Hopefully, as the person is moving to phase 2, you will realise that their performance is increasing and they can deliver more.

Think about it on a psychological level. If someone joins and they are made aware that you are planning to introduce their role in phases from the start, completing the first phase and moving to the next is progression for them. This feeling of progression will provide motivation. With that motivation comes enthusiasm and better results, which is good for the business, the individual and everyone on the team.

After another few weeks or months of taking on the added phase 2 deliverables, you will have a decision to make. You might realise that the person is still engaged and wants to move forward to phase 3. Alternatively, you might find that cracks are starting to appear and timelines are slipping a little bit. If that is the case you might want to hold off on the added pressure at this time.

Your role as a line manager is to help that individual, to perform at the peak of their abilities and not drop into the underperforming section of the graph.

You need to recognise when they have reached their capacity, and that slip is starting to happen. At that point you can bring them back to the peak and constantly adjust, based on performance, to keep them there, to maximise their potential.

Phase 3, in this case, can be a little more improvised. It could be that you decide not to introduce the extra deliverables or it could be that some are introduced and not others. The point is that it shouldn’t be an issue for you at this stage. You have got a team member performing at their peak and all of the core deliverables are being met. Anything extra was an add-on.

As you chunk the process down, phase it out, it allows you that flexibility to test and measure. It means that you can adapt and help the person reach their potential, while they’re enjoying the role alongside you and contributing positively to the business.

Remember that you don’t necessarily need to wait until someone joins fresh to put any of these ideas in place. If there is someone in the team that you think has a higher, untapped potential, who can move up that performance scale, to reach their peak, you can always phase in any new deliverables you want to add to that person’s role. The key is to involve them in the process so that they can benefit from that same feeling of progression.

As well as this, you can read more about the important factors in improving team productivity in an article from earlier in the year.

I hope this helps when introducing new team members in the future and in getting the most out of the performance of your team as a whole.

I would be more than happy to discuss this further with you or to help with any other team issues you may be having, so feel free to get in touch.